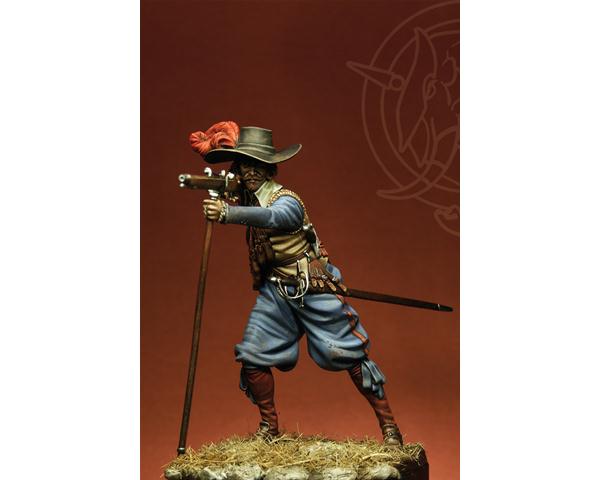 Escala 75mm
Este producto se suministra desmontado y sin pintar. Pegamento y pinturas no incluidos.
Scultor: M. Bruno - Pintor: D. Cartacci
The musketeer was an expert soldier in the use of the musket, a fire-arm used by the infantry and also on the glacis. The musket was a muzzle-loading type fire-arm with a fuse or with wheel, different from the arquebus as it was usually heavier and more powerful and had a higher calibre. The gunstock was straight and less oblique and could be up to one and half meters long and operating manuals reported dozens of manoeuvres to load it that during a battle, these, however were subsequently simplified . The musket needed to be supported by a mobile fork to aim and shoot. It was the weapon itself that qualified the soldier who would use it . The first corps of musketeers were founded during the second half of the XVI Century. These soldiers were also armed with a sword and a short dagger and they carried everything they needed for the loading of the musket: bullets, fuse, powder. The prime powder was carried in a flask while the so -called loading powder was carried inside twelve containers fastened to the bandoleer (the so-called twelve apostles). The bullets were kept in a hide bag next to the fuse of which a lighted piece of which was hand-held during the battle. Clothing consisted of a hat often adorned with feathers, a smock under a cloth jacket and a breastplate made out of buffalo hide. Trousers were wide and often adorned with ribbons and buttons on the sides. Colourful socks were worn.